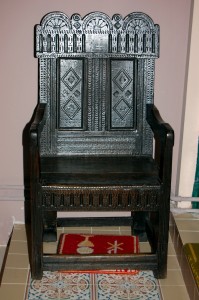 The Birth of Modern St. George’s

During the 19th Century, Belfast became the premier Irish industrial city – indeed one of the epicentres of the Industrial Revolution worldwide – and the population of the city grew rapidly. As a result, the new church of St. Anne became full to overflowing within a few decades. A group of parishioners formed themselves into Building Committee, and with minimal support from state or Diocese, erected a chapel of ease on the site of the old Corporation Church which opened in 1816 – this became today’s St. George’s Church.

Although St. George’s began life as a conventional Church of Ireland parish, after 1860 it became influenced by the High Church movement which had sprung to life in England. This High Church movement emphasised that Anglican Churches were part of the universal Catholic Church, and encouraged a renewed focus on the Sacraments of the Church.

St. George’s in the 20th Century

In the 20th Century, the residential population of the City Centre dwindled to almost nothing as people moved to the new suburbs. St. George’s suffered from declining congregations for most of the 20th Century, and there were several attempts to close the church. In the 1941 Belfast Blitz, the Parish School, which stood on the site of the current Parish Hall, was destroyed along with many other buildings around High Street. It was mercifully empty at the time.

When The Troubles began, St. George’s sat in the middle of the IRA’s City Centre bombing campaign. The church was damaged on 17 occasions, perhaps most notably when a 150 pound bomb hidden in a coffin in Church Lane exploded on Easter Saturday in 1972, causing serious structural damage to the church, and many parishioners became too afraid to travel into the City Centre. The future for St. George’s looked bleak, although through the difficult years a faithful few, including the Rector, Organist and a small but devoted congregation kept the Parish and its unique traditions alive. St. George’s was sustained in those difficult times by its distinctive ‘High Church’ ethos, which first began to emerge as early as the 1860s, and which has attracted parishioners from across the Greater Belfast area and beyond.

As the level of violence slowly declined through the 1980s, renewal came to St. George’s, with a revived men and boys’ choir and a steady growth in numbers attending services, leading to the vibrant, thriving Parish that exists today.